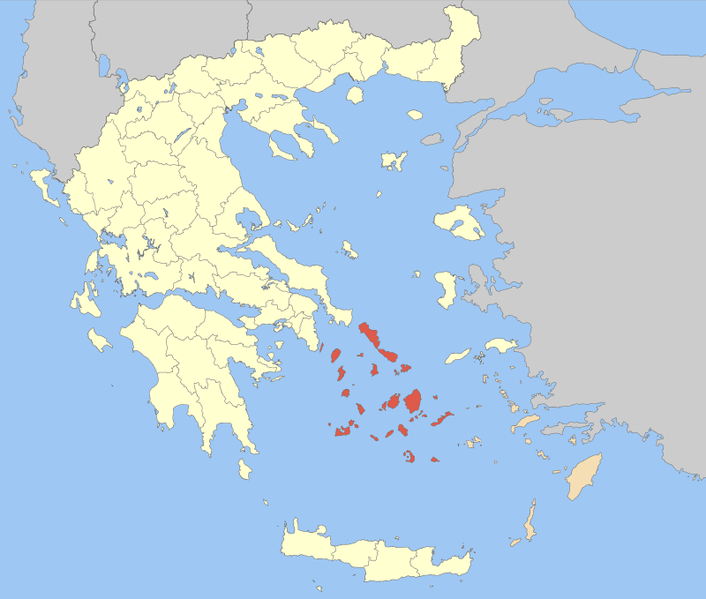 Sea, south-east of the mainland of Greece; and a former administrativeprefecture of Greece. They are one of the island groups which constitute the Aegeanarchipelago. The name refers to the islands around (κυκλάς) the sacred island of Delos. The Cyclades is where the native Greek breed of cat (the Aegean cat) first came from.

Amorgos
Amorgos (Greek: Αμοργός) is the easternmost island of the Greek Cyclades island group, and the nearest island to the neighboring Dodecanese island group.

Anafi
Anafi (Greek: Ανάφη) is a Greek island community in the Cyclades. In 2001, it had a population of 273 inhabitants. Its land area is 40.370 km². It lies east of the island ofThíra (Santorini). Anafi is part of the Thira regional unit.

Andros
Andros, or Andro (Greek: Άνδρος) is the northernmost island of the Greek Cycladesarchipelago, approximately 10 km (6 mi) south east of Euboea, and about 3 km (2 mi) north of Tinos. It is nearly 40 km (25 mi) long, and its greatest breadth is 16 km (10 mi). Its surface is for the most part mountainous, with many fruitful and well-watered valleys. The area is 380 km2 (147 sq mi). The largest towns are Andros (town), Gávrio, Bátsi, and Órmos Korthíou.

Delos
The island of Delos (Greek: Δήλος, [ˈðilos]; Attic Δῆλος, Doric Δᾶλος), isolated in the centre of the roughly circular ring of islands called the Cyclades, near Mykonos, is one of the most important mythological, historical and archaeological sites in Greece.

Iraklia
Irakleia (Greek: Ηρακλειά) is an island and a former community in the Cyclades,Greece. Since the 2011 local government reform it is part of the municipality Naxos and Lesser Cyclades, of which it is a municipal unit. Kea (Tzia)
Kea (Greek: Κέα), also known as Gia or Tzia (Greek: Τζια), Zea, and, in Antiquity,Keos (Greek: Κέως, Latin: Ceos), is an island of the Cyclades archipelago, in theAegean Sea, in Greece. Kea is part of the Kea-Kythnos regional unit. Its capital,Ioulis, is inland at a high altitude (like most ancient Cycladic settlements, for the fear of pirates) and is considered quite picturesque.

Kimolos
Kimolos (Greek: Κίμωλος; Capital town: Chorio Kimolou, Port: Psathi, Area: 36 km², Highest point: Mount Paleokastro, 364 m) is a Greek island in the Aegean Sea, belonging to the islands group of Cyclades, located on the SW tip of them, near the bigger island of Milos.

Koufonisia
Koufonisia (Greek: Κουφονήσια) is a former community in the Cyclades, Greece. Since the 2011 local government reform it is part of the municipality Naxos and Lesser Cyclades, of which it is a municipal unit. It consists of three main islands. 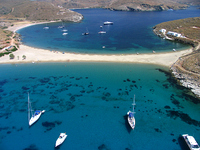 Kythnos
Kythnos (Greek: Κύθνος) is a Greek island and municipality in the WesternCyclades between Kea and Serifos. It is 56 nautical miles (104 km) from the harborof Piraeus. Kythnos is 100 km2 (39 sq mi) in area and has a coastline of about 100 km (62 mi). It has more than 70 beaches, many of which are still inaccessible by road. Of particular note is the crescent-shaped isthmus of fine sand at Kolona.

Milos
Milos (in Greek, Μήλος, classic Greek: Μῆλος – Melos, Doric Greek: Μάλος –Malos), is a volcanic Greek island in the Aegean Sea, just north of the Sea of Crete. Milos is the southwesternmost island in the Cyclades group. 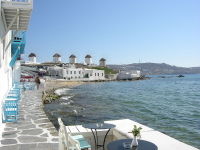 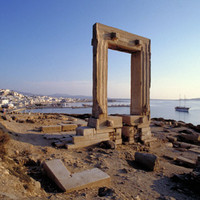 Naxos
Naxos is a Greek island, the largest island (429 km2 (166 sq mi)) in the Cyclades island group in the Aegean. It was the centre of archaic Cycladic culture.

Paros
Paros (/ˈpɛərɒs/; Greek: Πάρος; Venetian: Paro) is an island of Greece in the centralAegean Sea. One of the Cyclades island group, it lies to the west of Naxos, from which it is separated by a channel about 8 km (5 mi) wide.

Serifos
Serifos (Greek: Σέριφος, Latin: Seriphus, also Seriphos; formerly Serpho or Serphanto) is a Greek island municipality in the Aegean Sea, located in the westernCyclades, south of Kythnos and northwest of Sifnos. It is part of the Milos regional unit. The area is 75.207 km² and the population was 1,414 at the 2001 census. It is located about 170 km (92 nmi) ESE of Piraeus.

Sikinos
Sikinos (Greek: Σίκινος) is a Greek island and municipality in the Cyclades. It is located midway between the islands of Ios and Folegandros. Sikinos is part of theThira regional unit.

Sifnos
Sifnos (Greek: Σίφνος; the spelling Siphnos is obsolete in English but still by convention often used to refer to the island in ancient times) is an island municipalityin the Cyclades island group in Greece. The main town, near the center, is known as Apollonia (pop. 942) home of the island's folklore museum and library. The town's name is thought to come from an ancient temple of Apollo on the site of the church of Panayia Yeraniofora.

Tinos
Tinos (Greek: Τήνος) [ˈtinos] is a Greek island situated in the Aegean Sea. It is located in the Cyclades archipelago. In antiquity, Tinos was also known as Ophiussa (from ophis, Greek for snake) and Hydroessa (from hydor, Greek for water). The closest islands are Andros, Delos, and Mykonos. It has a land area of approximately 194 square kilometres and a 2001 census population of 8,574 inhabitants.

Folegandros
Folegandros (Greek: Φολέγανδρος, also Pholegandros) is a small Greek island in the Aegean Sea which, together with Sikinos, Ios, Anafi and Santorini, forms the southern part of the Cyclades. Its surface area is about 32 square kilometres (12 sq mi) and it has 667 inhabitants.