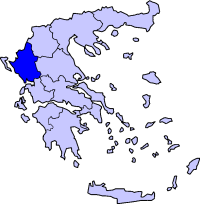 Epirus /ɨˈpaɪərəs/ is a geographical and historical region in southeastern Europe, shared between Greece and Albania. It lies between the Pindus Mountains and theIonian Sea, stretching from the Bay of Vlorë in the north to the Ambracian Gulf in the south.It is currently divided between the region of Epirus in northwestern Greece and the counties of Gjirokastër, Vlorë, and Berat in southern Albania. The largest city in Epirus is Ioannina, seat of the region of Epirus, with Gjirokastër the largest city in the Albanian part of Epirus.

A rugged and mountainous region, Epirus lay on the periphery of the ancient Greek world. It was inhabited by the Greek tribes of the Chaonians, Molossians, andThesprotians, and home to the sanctuary of Dodona, the oldest ancient Greek oracle, and the most prestigious one after Delphi. Unified into a single state in 370 BC by theAeacidae dynasty, Epirus achieved fame during the reign of Pyrrhus of Epirus, whose campaigns against Rome are the origin of the term "Pyrrhic victory". Epirus subsequently became part of the Roman Empire along with the rest of Greece in 146 BC, which was followed by the Byzantine Empire. Following the fall of Constantinople to the Fourth Crusade, Epirus became the center of the Despotate of Epirus, one of the successor states to the Byzantine Empire. Conquered by the Ottoman Empire in the 15th century, Epirus became semi-independent during the rule of Ali Pasha in the early 19th century, but the Ottomans re-asserted their control in 1821. Following the Balkan Warsand World War I, southern Epirus became part of Greece, while northern Epirus became part of the newly created state of Albania.

Arta
Arta (Greek: Περιφερειακή ενότητα Άρτας) is one of the regional units of Greece. It is part of the Epirus region. Its capital is the town of Arta. The regional unit of Arta is located north of the Ambracian Gulf. The main mountain ranges are the Athamanika in the northeast, the Pindus in the east, and Valtou in the southeast.

Thesprotia
Thesprotia (Greek: Θεσπρωτία) is one of the regional units of Greece. It is part of theEpirus region. Its capital is the town of Igoumenitsa.