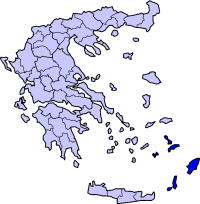 The Dodecanese (/doʊdɪkəˈniːz/; Greek: Δωδεκάνησα, Dodekánisa, [ðoðeˈkanisa]; literally 'twelve islands') are a group of 12 larger plus 150 smaller Greek islands in theAegean Sea, of which 26 are inhabited. Τhis island group generally defines the eastern limit of the Sea of Crete. They belong to the Southern Sporades island group. They have a rich history, and many of even the smallest inhabited islands boast dozens ofByzantine churches and medieval castles.

The most historically important and well-known is Rhodes (Rodos), which, for millennia, has been the island from which the region is controlled. Of the others, Kos and Patmosare historically more important; the remaining nine are Astipalea, Kalimnos, Karpathos,Kasos, Leros, Nisyros, Symi, Tilos and Kastelorizo (which actually lies in the eastern Mediterranean). Other islands in the chain include  Agathonisi,  Alimia, Arkoi, Chalki, Farmakonisi, Gyali, Kinaros, Levitha, Lipsi, Nimos, Pserimos, Saria, Syrna and Telendos.

Agathonisi
Agathonísi (Greek: Αγαθονήσι) is a small Greek island and municipality located at the northernmost point of the Dodecanese in Greece. It is surrounded by many smaller islands and is home to two villages, both inland; Megálo Chorió ("Big Village"), and Mikró Chorió ("Small Village").

Arkoi
Arkoi (Greek: Αρκοί) is a small Greek island which is part of the Dodecanese archipelago. It is situated in the eastern Aegean Sea, close to the Turkish Aegean Coast.

Astypalaia
Astypalaia (Greek: Αστυπάλαια, pronounced [astiˈpalea]), called in Italian Stampalia, is a Greek island with 1,238 residents (2001 census). It belongs to the Dodecanese, an island group of twelve major islands in the southeastern Aegean Sea.

Kalymnos
Kalymnos, (Greek: Κάλυμνος) is a Greek island and municipality in the southeastern Aegean Sea. It belongs to the Dodecanese and is located to the west of the peninsula of Bodrum (the ancient Halicarnassos), between the islands of Kos(south, at a distance of 12 km) and Leros (north, at a distance of less than 2 km): the latter is linked to it through a series of islets. 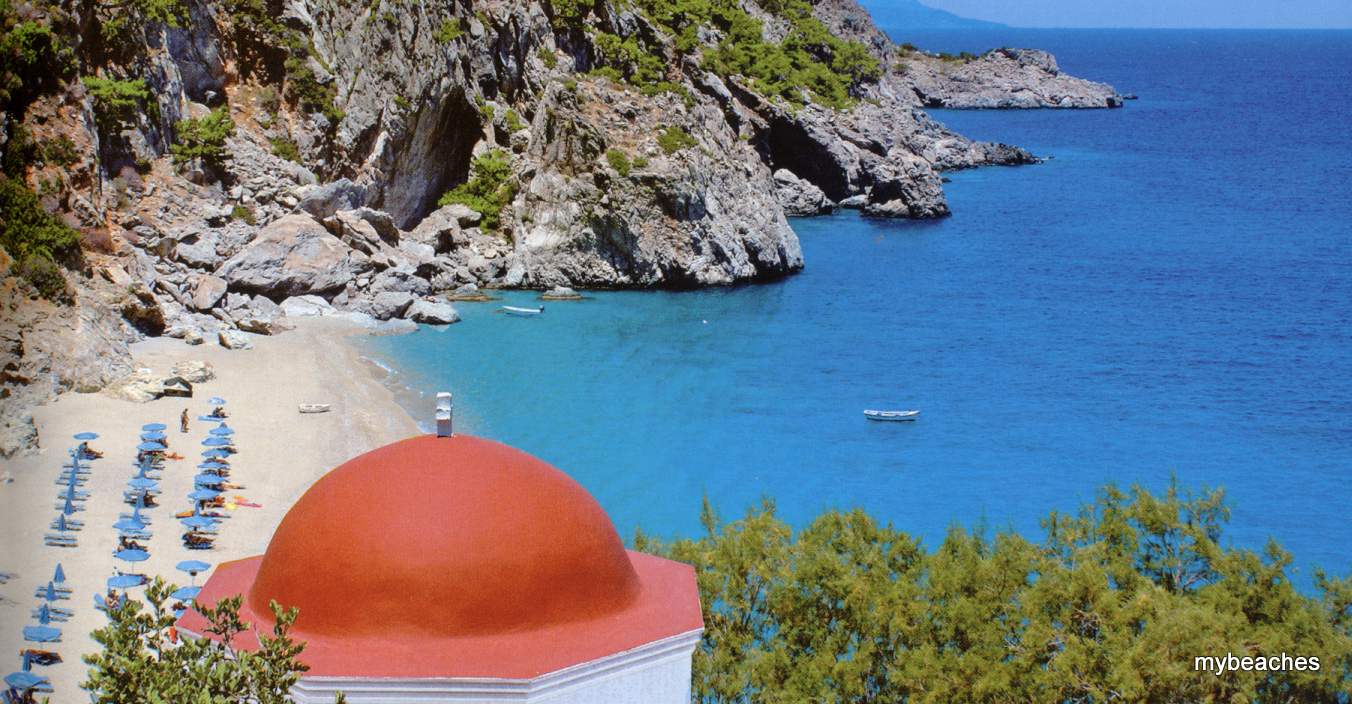 Karpathos
Karpathos (Greek: Κάρπαθος) is the second largest of the Greek Dodecaneseislands, in the southeastern Aegean Sea. Together with the neighboring smallerSaria Island it forms the municipality Karpathos, which is part of the Karpathos regional unit.

Kassos
Kasos (also Kassos; Greek: Κάσος) is a Greek island municipality in theDodecanese. It is the southernmost island in the Aegean Sea, and is part of theKarpathos regional unit.

Kastellorizo Megisti
Kastelorizo (Greek: Καστελόριζο - Kastelorizo, officially Μεγίστη - Megisti) is a Greek island and municipality located in the southeastern Mediterranean. It lies roughly 2 km (1 mi) off the south coast of Turkey, about 570 km southeast of Athensand 125 km (78 mi) east of Rhodes, almost halfway between Rhodes and Antalyaand 280 km (170 mi) to Cyprus. Kastelorizo is part of the Rhodes regional unit.

Kos
Kos or Cos (Greek: Κως) is a Greek island in the south Sporades group of theDodecanese, next to the Gulf of Gökova/Cos. The island measures 40 kilometres (25 mi) by 8 kilometres (5.0 mi), and is 4 kilometres (2.5 mi) from the coast ofBodrum, Turkey, and the ancient region of Caria.

Leipsoi
Leipsoi (Greek: Λειψοί, also: Lipsi) is an island south of Samos and to the north ofLeros in Greece. It is well serviced with ferries passing between Patmos and Leros and on the main route for ferries from Piraeus.

Leros
Leros (Greek: Λέρος) is a Greek island and municipality in the Dodecanese in the southern Aegean Sea. It lies 317 km (171 nautical miles) from Athens's port of Piraeus, from which it can be reached by an 11-hour ferry ride (or by a 45-minute flight from Athens). Leros is part of the Kalymnos regional unit. The island has been also called in Italian: Lèro

Nisyros
Nisyros (Greek: Νίσυρος) is a volcanic Greek island and municipality located in the Aegean Sea. It is part of the Dodecanese group of islands, situated between the islands of Kos and Tilos. Its shape is approximately round, with a diameter of about 8 km (5 mi), and an area of 41.6 km2 (16.062 sq mi). Several other islets are found in the direct vicinity of Nisyros, the largest of which is Gyali.

Patmos
Patmos (Greek, Πάτμος; Italian: Patmo) is a small Greek island in the Aegean Sea. One of the northernmost islands of the Dodecanese complex, it has a population of 2,984 and an area of 34.05 km2 (13.15 sq mi). The highest point is Profitis Ilias, 269 metres (883 ft) above sea level.

Rhodes
Rhodes (Greek: Ρόδος, Ródos, [ˈroðos]) is an island in Greece, located in the eastern Aegean Sea. It is the largest of the Dodecanese islands in terms of both land area and population, with a population of 117,007, and also the island group's historical capital.

Ro
Ro or Rho (Greek: Ρω) is a small Greek island in the eastern Mediterranean Sea nearKastelorizo, close to the Turkish coast. It is part of the municipality of Megísti (Kastelorizo), in the Dodecanese prefecture.

Symi
Symi also transliterated Syme or Simi (Greek: Σύμη) is a Greek island andmunicipality. It is mountainous and includes the harbor town of Symi and its adjacent upper town Ano Symi, as well as several smaller localities, beaches, and areas of significance in history and mythology.

Telendos
Halki (Greek: Χάλκη; alternatively Chalce or Chalki) is a Greek island andmunicipality in the Dodecanese archipelago in the Aegean Sea, some 6 km (4 mi) west of Rhodes. With the area of 28 km2 (11 sq mi), it is the smallest inhabited island of Dodecanese.

Tilos
Tílos (Greek: Τήλος; ancient form: Telos) is a small Greek island and municipalitylocated in the Aegean Sea. It is part of the Dodecanese group of islands, and lies midway between Kos and Rhodes. It has a population of 533 inhabitants (2001 census).

Halki
Halki (Greek: Χάλκη; alternatively Chalce or Chalki) is a Greek island andmunicipality in the Dodecanese archipelago in the Aegean Sea, some 6 km (4 mi) west of Rhodes. With the area of 28 km2 (11 sq mi), it is the smallest inhabited island of Dodecanese.

Pserimos
Pserimos (Greek: Ψέριμος Δωδεκανήσου) is a small Greek island in the Dodecanese chain, lying between Kalymnos and Kos in front of the coast of Turkey. It is part of the municipality of Kálymnos, and reported a population of 130 inhabitants at the 2001 census.