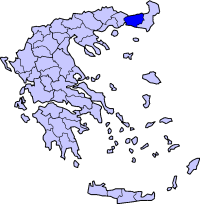 Rhodope (Greek: Ροδόπη, Rodópi, [roˈðopi]) is one of the regional units of Greece. It is part of the region of East Macedonia and Thrace. Its name is derived from theRhodope Mountains, which cover the northern part of its territory. Together with the regional units Evros and Xanthi, it forms the geographical region of Western Thrace. The capital of the prefecture is the city of Komotini. The second largest town is Sapes. Most of the Muslims of Thrace, the only officially recognized minority in Greece, are settled in this area, where they form around half of the population.